Turtles can't talk... so it's up to us to speak for them 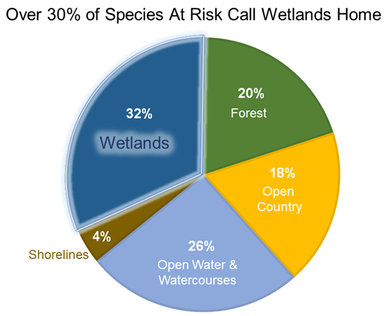 A Map turtle
urtles can’t talk, but if they could, they would tell you that their livelihood in southern Ontario is hanging by a thread.

Ontario is home to 8 species of turtle. All are found in southern Ontario, and all are designated as Species At Risk. Its no coincidence that the most developed region in Canada is experiencing huge losses in biodiversity. Along with Ontario’s 8 turtle species, over 180 plant and animal species found in southern Ontario are designated as At Risk. Of those, 30% need wetlands to survive.  Habitat loss and degradation—resulting from land use changes and disturbance from human activities—is the biggest threat to species at risk, like Ontario’s turtles.

Under Bill 23, changes to Ontario’s Wetland Evaluation System (OWES) will make it harder for a wetland to be classified as Provincially Significant. Provincially Significant Wetlands are afforded protections to ensure that they are not developed or altered. Currently, the Special Features category under OWES considers a wetland’s value as habitat for threatened or endangered species … but changes to OWES under Bill 23 will remove this consideration, meaning still less protection for the province’s most vulnerable flora and fauna. Even with protections to species at risk habitat afforded under the Endangered Species Act, Ford’s government has granted thousands of permits allowing harm to species at risk and their habitats. Continuing to remove protection for species at risk and their habitats will only make it easier for critical habitat to be destroyed.


Bill 23 would also see smaller wetlands that contribute to larger wetland complexes lose protection. Although small patches of habitat may not seem as important as larger areas of unfragmented habitat, recent studies have shown that a group of small habitat patches can host as many or more species than a large patch. As more and more smaller habitat patches are destroyed, the connectivity of larger wetland complexes will also be lost. These smaller patches become islands, isolated from the larger mainland, surrounding by a sea of human activities. For species at risk, this might mean that movement between habitat patches is no longer possible or that they will have to traverse a dangerous, anthropogenic landscape to reach their destination. Without being able to move between wetlands, species are more vulnerable because they cannot escape any adverse changes that may occur in their home wetland. And by traversing longer distances between wetlands, species increasingly encounter roads, which are the leading cause of morality for turtles and other herpetofauna. Both scenarios further increase threats of these already extremely vulnerable species. 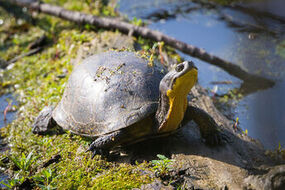 A Blanding's turtle
Ford’s government has already demonstrated they do not consider the cumulative affects their actions have on species at risk. Since 2007, Blanding’s turtles have been impacted by 1,403 individual approvals for harmful activities, with no regard for the cumulative impact this would have on the species. Under Ford’s government, we’ve already lost habitat protection for many species at risk and there is no long term plan to improve the overall state of species at risk in the province. Further negative changes could be so detrimental that we lose some of these species forever.

Turtles can’t talk, but if they could, they would tell you that their livelihood in southern Ontario is hanging by a thread. Please speak up for Ontario’s species at risk and take action to Save Ontario Wetlands!